skip to main | skip to sidebar
NolaCycle is a project aimed to create a high quality cycling map of New Orleans. Cycling maps include information beyond just streets and their names that benefits cyclists. In our map, we highlight the pavement quality, car travel speed, lane width, and special caution areas (busy intersections, man-eating potholes, or high accident areas). Volunteers help to collect this data by attending mapping events.
The information is then digitized to make a map of the data we collected to help cyclists - young, old, local, and tourist alike - navigate New Orleans.
Check out the blog for updates on the project, ways to get involved, and volunteer mapping events!
If you have questions, feel free to make a public comment on the blog entry or e-mail us directly at info@nolacycle.com.

Rim and Spoke: the River Built Everything

The River Builds Everything

You can blame all of New Orleans on the Mississippi River, because it built the soggy land we ride on. It built the streets crooked to confuse midwesterners. It built it flat so that you won't wear your knees out pedaling that beat up cruiser bike. It built it wet, so that the pavement sinks, settles, and slides at different rates, making potholes, sinkholes, and buckled pavement. It built it low so that you have take bridges to get out of town. And when we stopped it from building New Orleans, we started to lose it to the Gulf of Mexico.

Re-establishing the ecological function of the river is the only way to stave off coastal land loss and the destruction of New Orleans. Those are called Diversions, and apparently, they are also handy during incredibly bad industrial accidents, like Oil Rivers flowing at us from the Gulf bottom. The River is the cyclist's ally in the fight against fossil fuels.

Being mindful of the river and its curve can also get you where you're going faster.

For example, if you work on oak st, and live in the marigny, you might think it's easiest to ride annunciation, since you might drive tchoupitoulas (to avoid traffic at carrollton, 'natch). But if you ride that rim, it's the longest possible route--which matters for a cyclist, especially one carrying a load on her back.

There are several shorter ways than annunciation, which is probably the longest way, since it is the rim farthest from the "hub" of broadmoor. Whether or not these ways are quicker depends somewhat on your riding style, but let's examine the route length to start.

In the red, a route through the park, onto prytania. a cool 8.2 miles, but one on a well-paved, well-shaded street. If you take prytania, you won't have to make too many decisions about where to turn, but you'll take extra time getting to where you're going. And then, you usually have to bike back.

Moving closer to the hub of broadmoor, the blue line is a "Liberty" rim route, with a few more jukes to avoid one ways and bad streets. It measures around 7 miles. This is a route that takes advantage of our nolacycle data, pointing to the decenly paved streets often overlooked. 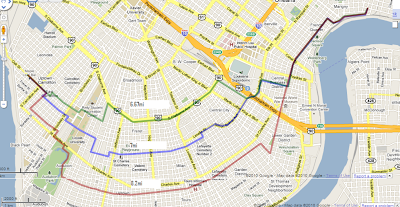 [click to expand]
The shortest rim route is a "Claiborne" route in green. Here, I tried to choose a route that would be equal in distance to the "Liberty" route. I thought it would be longer because of the long stretches spent correcting the course on spoke streets to avoid the deathly Claiborne overpass and to return to the river at the CBD. But the route closest to the hub in Broadmoor totals 6.67 miles, shorter than the Liberty route, with fewer jukes and better pavement for increased speed--it's clearly the fastest route. The traffic on Claiborne can be intimidating, but it's by no means a killer for an experienced rider.

This rule of navigation can even help you save time in a car; the highways through New Orleans are also an exception to it, as traffic managers made efforts to subvert the river-based logic that built the original grid.

Next time, we'll touch upon these "Wormholes"; where they are useful and where they can destroy you.

scott
Posted by scott eustis at 12:21 AM

You can view our data map online! The NolaCycle Bike Map website is still in beta stage, but it's coming along nicely! If you see something that is entered incorrectly or would like to help with data entry, please contact info@nolacycle.com.

If you'd like to get e-mail updates about the project, please send a message to info@nolacycle.com.

If you're on Facebook, join the NolaCycle Community Bike Map Project group. We post events and updates regularly.

Bike Maps From Other Cities