skip to main | skip to sidebar
NolaCycle is a project aimed to create a high quality cycling map of New Orleans. Cycling maps include information beyond just streets and their names that benefits cyclists. In our map, we highlight the pavement quality, car travel speed, lane width, and special caution areas (busy intersections, man-eating potholes, or high accident areas). Volunteers help to collect this data by attending mapping events.
The information is then digitized to make a map of the data we collected to help cyclists - young, old, local, and tourist alike - navigate New Orleans.
Check out the blog for updates on the project, ways to get involved, and volunteer mapping events!
If you have questions, feel free to make a public comment on the blog entry or e-mail us directly at info@nolacycle.com.

If you've been up on Gentilly Blvd lately, you might have noticed something different. The street is now on a diet - a road diet! This is a common traffic calming treatment "given to an urban roadway in which the number of lanes is reduced, and the freed space converted to parking, bike lanes, landscaping, walkways, or medians. Road Diets are implemented to provide additional pavement and safety for bicyclists and pedestrians, reduce speeding, and to make room for parking" (via the Streetsblog wiki).

Gentilly Blvd. through Gentilly, is now 2 lanes in each direction (instead of 3) and includes a bike lane with a striped buffer between the furthest right car travel lane and the bike lane. The idea behind the buffer is reduce the number of lanes of car traffic (since 3 was too many for how many car trips the road sees on average daily) which encourages more careful (and hopefully slower) driving behavior and reduces the number of lanes pedestrians must travel through to cross the road.

Here are some pictures I stole from Tim Eskew of Bicycle Michael's. This shows the bike lane and buffer (which changes size based on available space) at a few points along the road. Some diagonal striping has also been added in some sections, though not seen in these pictures. 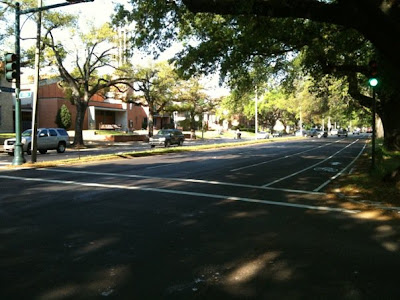 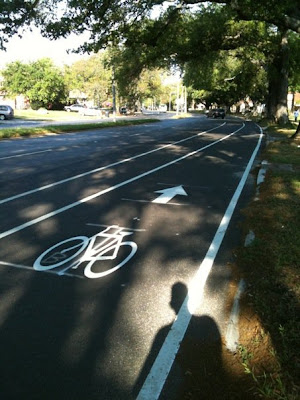 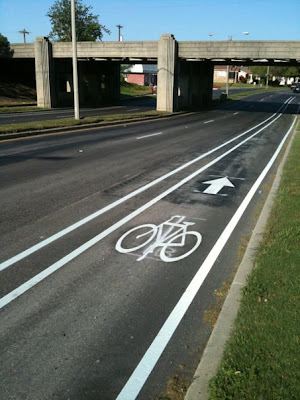 Portland has started using this type of bike lane (called enhanced bicycle lanes), finding it works better than bike lanes with raised buffers or landscaped barriers (called Cycle Tracks). Here's some Q & A from the Portland Bureau of Transportation via The Oregonian about this kind of design:

What is an enhanced bicycle lane?

An enhanced bicycle lane is designed so that it provides a more protected and comfortable space for cyclists than a conventional bike lane and does not have the same barriers to sight lines as a Cycle Track - where view of cyclists may be obstructed by parked cars.

Why are we constructing enhanced bicycle lanes (i.e., what's wrong with these streets the way they are now)?

These streets currently work fine for people who are comfortable riding bicycles in mixed traffic. However, our designs are intended to make bicycling more comfortable for the majority of Portlanders who are not comfortable riding under such conditions. Our analysis indicates that most Portlanders would use a bicycle much more often than they currently do if they didn't have to mix so much with automobiles. A buffered bicycle lane provides that opportunity.

Why not use a simple bicycle lane?

Because the enhanced bicycle lane, with the added shy zones, offers a more comfortable riding environment that we believe it is more consistent with our efforts to make bicycling a part of daily life in Portland.

How does an enhanced bike lane provide more protection for cyclists than a bike lane?

Enhanced bike lanes provide more protection for cyclists by providing 'shy' or buffered zones on either side of the cyclist.

What will drivers notice that is different about driving on a street with an enhanced bike lane?

There isn't much of a change for drivers. They will still need to watch carefully for cyclists when they are turning right at cross-streets or driveways. They will also need to take care when parking on-street which is accomplished by crossing the enhanced bicycle lane. Cyclists will always be clearly visible to drivers because, unlike a Cycle Track, the buffered bicycle lane does not have the barrier of parked cars between the bicycle lane and the travel lane.

So all in all, looks like these new buffered bike lanes should be pretty awesome for New Orleanian cyclists. Hopefully they'll encourage more people to bike instead of drive. I haven't rode them myself yet, but Jennifer Ruley at Department of Public Works has given them the first hand thumbs-up and Tim is pretty happy as well.

I did, however, drive down Gentilly Blvd today on my way back from Lakeview. I wanted to figure out how many miles it was from my house to the Fairground if I traveled St. Claude Ave. to Franklin Ave. (newly resurfaced and looking lovely - but no bike improvements, yet at least), to Gentilly Blvd. It's really not too far, considering it will allow me to avoid the insanity of Mid-City during Jazz Fest. But I saw something pretty disgusting on my way home:

Between Elysian Fields, past Franklin Avenue, I saw at least 3 cars travel in the buffered bike lane! Obviously, New Orleanians aren't really sure how to do a road diet. In all fairness, there are no signs explaining cars must stay out of the buffer zone, though anyone with a drivers license should know diagonal white strips don't equal a car travel lane. Also, I haven't seen anyone bike Gentilly the two times I've driven down it since the lane went in.

If you're biking down Gentilly Blvd., keep an eye out for cars in your bike lane! If you can, write down the plate number and report it to the police. Hopefully as more people start biking on Gentilly, less cars will try to use the bike lane as a short cut around traffic. Also, if enough people report these acts to the police, maybe they'll start monitoring the area.

New Orleans drivers are going to need more help, beyond just striping, if they're going to be successful with this new diet.

But hey, Gentilly Blvd, 4 lanes looks good on you. You we're kinda chubby back when you were a 6. I don't mean to be a jerk, but I really didn't want to go on a bike ride date with you back then. I think you look pretty hot now. Want to be my bike route?

You can view our data map online! The NolaCycle Bike Map website is still in beta stage, but it's coming along nicely! If you see something that is entered incorrectly or would like to help with data entry, please contact info@nolacycle.com.

If you'd like to get e-mail updates about the project, please send a message to info@nolacycle.com.

If you're on Facebook, join the NolaCycle Community Bike Map Project group. We post events and updates regularly.

Bike Maps From Other Cities